How Kids Should Interact

This article was originally created by Dr Sophia Yin

When a child is bitten by a four-legged family member, it can turn the household upside-down. Owners feel puzzled and confused. “They sleep together all the time,” they might say, or, “He’s always been really good. He even lets Timmy sit on him.” In a majority of cases, the bite seems out of the blue. The humans can’t fathom why their once-trusted companion would bite an innocent child. But anyone who reads “dog” or can see life from the pet’s point of view would most likely say, “I’m surprised it didn’t happen sooner.”

The fact is, a quick perusal of YouTube or a thorough investigation of a bite reveals that often the bite occurs because humans, especially children, are extremely rude. Parents may view their kid’s behaviours as cute and assume that because their dog is tolerating the behaviour now, he will have an endless fuse and always put up with it, rather than eventually exploding. In other words, parents expect dogs to behave like saints, even when they are pestered to the point that would try the average human’s patience and cause her to blow up!

For instance, I recall one tragic case where an infant was left at home with the babysitter and the family pitbull. The infant was allowed to incessantly crawl after the dog, tailing the dog as if she was an armed criminal. He followed her from corner to corner as she kept trying to get away from the baby, but the dog had no escape. While the parents were able to take a “vacation” from their child by hiring a babysitter and leaving the house, the dog was left at home to fend for herself. Ordinarily, a person being pestered this way with no way to escape would eventually turn and yell and possibly even resort to violence. A dog might do the same—turn and bark, snarl, or growl. But when all of these early signs are ignored, escalation to a bite can be the next step. Unfortunately, a bite by any large dog at her wits end can cause serious damage to a child, and in this case it resulted in death.

More often than not, cases where the dog bites a young child are tragic—often more so for the dog. The dog may be relinquished to a shelter, where he has a low probability of safe adoption. Or he may be euthanized after a quarantine period. The worst part of the story is that these bites could often have easily been prevented just by understanding the types of actions that drive a dog to feel bullied or pestered so much that he feels he has to bite.

In fact, understanding what can drive a dog to bite the family kids is pretty simple. They are the same things that drive humans to need a break from their kids.
Reason 1: For instance, most people dislike it when others stick their grimy hands in their meal. Similarly, dogs want to eat in peace.

Reason 2: We teach children that it’s clearly wrong to steal toys from each other. It’s also rude to steal toys from the dog. Kids should be taught to leave Fido’s toys alone. To build in a tolerance in case the child makes a mistake when your attention has lapsed, dogs should be trained to give up their toy for a reward or even a sequence of rewards. That way, they will willingly give the child the toy instead of feeling possessive.

Reason 3: Kids frequently can’t help but get in your face. They often have to be trained to maintain the appropriate social distance. Similarly, putting your face into a dog’s face, even if it’s all in the family, can be irritating to the dog, especially when the dog has no control over the child’s behaviour. 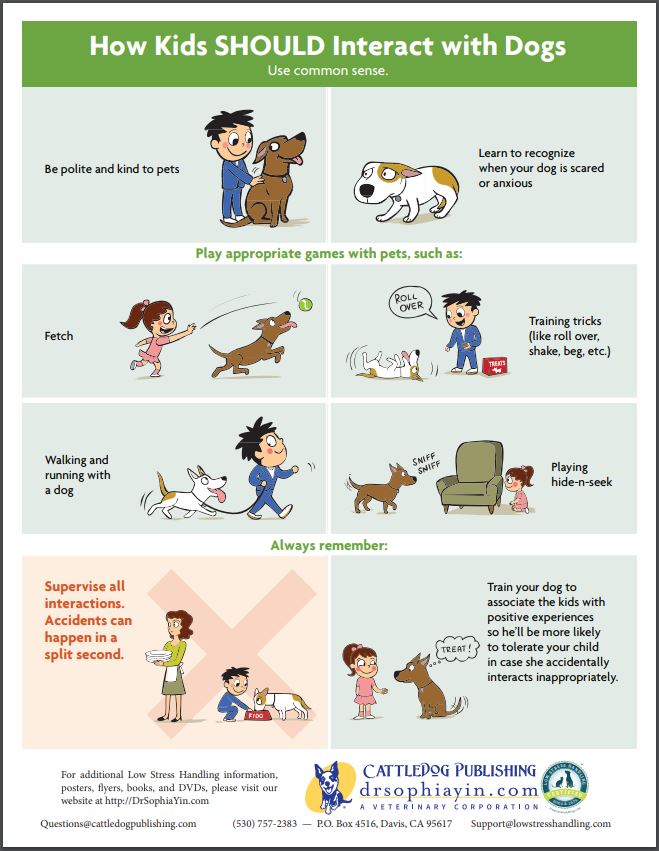 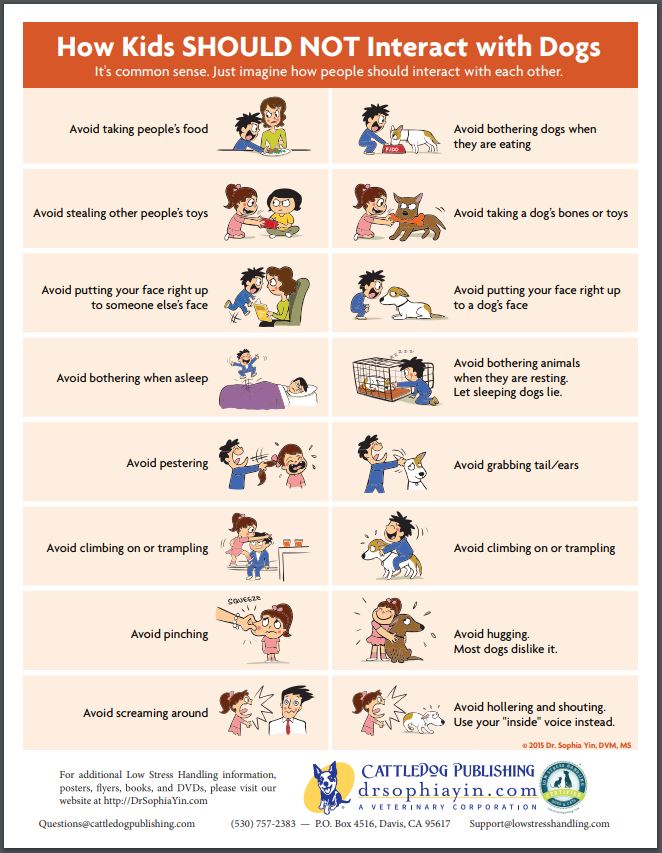 Reason 4: Most people dislike being disturbed when they are resting or sleeping. But fortunately for us humans, we can often close or lock our bedroom door. Similarly, dogs need a safe location where they can be away from kids and excitement. Kids should avoid bugging them in their “private” location or any time they are sleeping or resting. If they call the dog from far away and the dog chooses to get up and come over to the child, this type of interaction is okay. But if the dog chooses to be left alone, he should be.

Reason 5: Kids dislike being handled roughly, and so do dogs. Dogs can be trained to tolerate or sometimes even enjoy this handling, so that they are not reactive when an accident occurs but in general children should be taught to be polite.

Reason 6: It’s rude to climb on, step on, or otherwise invade someone’s personal space. It’s also rude to do the same things with dogs.

Reason 8: We often forget that even some friendly gestures, such as pinching a child’s cheeks, may be irritating. In general, dogs dislike being hugged, even by family members. You can tell by the expression on their face. You can train dogs, especially as puppies, to enjoy cuddling and hugging and other close handling. But even so, it’s important for children to know the types of interactions their pet likes and also to realize that other dogs may not have the same tolerance as their dog does.

Types of Child-Dog Interactions That are Appropriate

With all of these DON’Ts, it must seem like kids can’t interact with pets at all. In reality, they just need to be taught to be polite and kind to pets, instead of treating their companion like he’s stuffed animal. Parents should also teach their children to read the signs that Fido is fearful or anxious, so that the child knows to back-off.

Once the children understand that they should be kind to their pet, they can be taught appropriate games to play. For instance, fetch where the dog willingly gives the toy and remains polite before it’s tossed is fun for dogs who love to retrieve. Kids and pets love to learn tricks that result in rewards such as yummy treats or bits of the dog’s meal/kibble. All dogs need their exercise, and kids can be a part of this too if the dog is well-trained. Hide-n-seek is a great way for dogs to learn to have fun, and the dog is practicing his search and rescue skills. 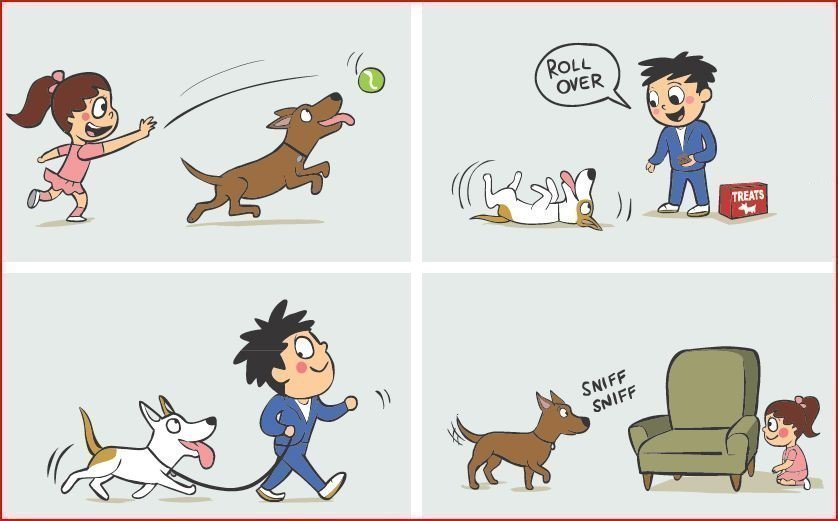 Adults should ensure that the dog has lots of positive associations with the kids. The kids can regularly give food rewards for the dog’s calm, polite behaviour, such as automatic sits. Even if the child is generally well-behaved and the dog very tolerant, it’s essential for all interactions to be supervised. Accidents can happen in a split second.

The key is to teach both the dog and the children to be polite. Make sure your children interact with your dog the same way you want them to interact with you. Follow these simple do’s and don’ts and everyone will be safer and happier.